The Seven ‘Wonders’ of the Galapagos: Best Things to Do and See

As individuals who thrive on adventure, we love to travel the globe and explore exhilarating and incredible destinations. Running trips from the deep south of New Zealand, right through to the heart of Ecuador and the Galapagos Islands; we definitely get to see the world for all its glorious beauty. Our love affair with the Galapagos Islands began well over a decade ago, when the team at Active Adventures began running adventure travel trips in this neck of the woods. We now bring our collective experience to you, and highlight what we call, ‘The Seven Wonders of the Galapagos Islands.’

We begin at San Cristóbal; the stunning existence of an ancient island, the first ‘Wonder’ of the Galapagos. The fifth largest and Eastern-most island of the Galapagos; San Cristóbal truly embraces the spirit of the Galapagos Island culture. The bark of the sea lions crashing against the waves, the charming scenery, matched with the blue and white rustic boutique hotel named Casa Blanca, leaves you with a lasting memory and a taste for more to come. 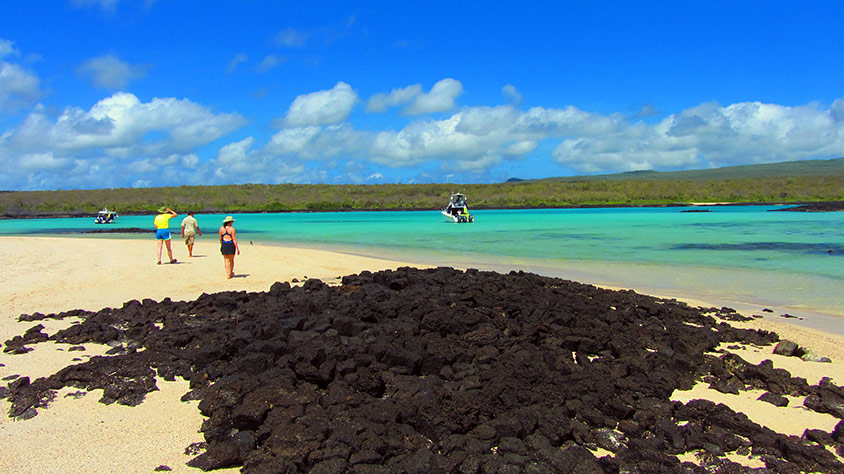 As you head down the coast you’ll want to stop off at La Loberia; a coral sandy beach scattered with Sea Lions, our second ‘Wonder’ of the Galapagos. La Loberia or Place of Sea Lions, has one of the largest Sea Lion colonies and nurseries on the island. A defining feature of the Galapagos Sea Lion is its pointy nose and its prominent thickness around the chest and shoulders, compared to that of the Californian Sea Lion who sports a fusiform shape. On the rocks, you’ll see the large Galapagos Marine Iguanas whose existence are unique to this world, you can’t help but notice the succulent and salt resistant plants growing along the sandy ocean beach too. With the sand between your toes, the aromatic sea air with its fresh, raw, and invigorating aroma wafting through your senses, will bridge a familiarity of a wonderful childhood memory with the present day. 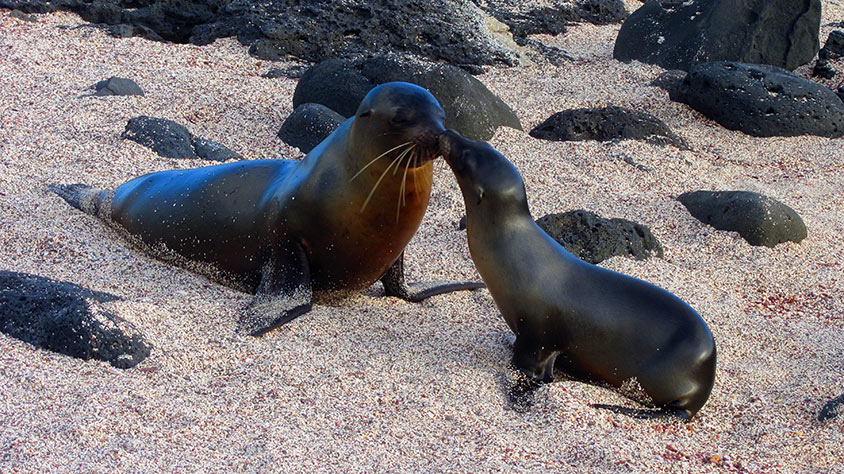 This captivating towering formation has a mystical element embedded in it; our third ‘Wonder’ of the Galapagos. A once complete lava cone now split into two, this formation has been known to resemble a sleeping lion "León Dormido", laying dormant on the ocean’s surface. Whilst you’re here, you may be lucky enough to see the Eagle Rays’ synchronised swimming dance, followed by the abundance of tropical fish, and turtles. Because the depth of its channel is mild, Kicker Rock is safe for diving and snorkelling. 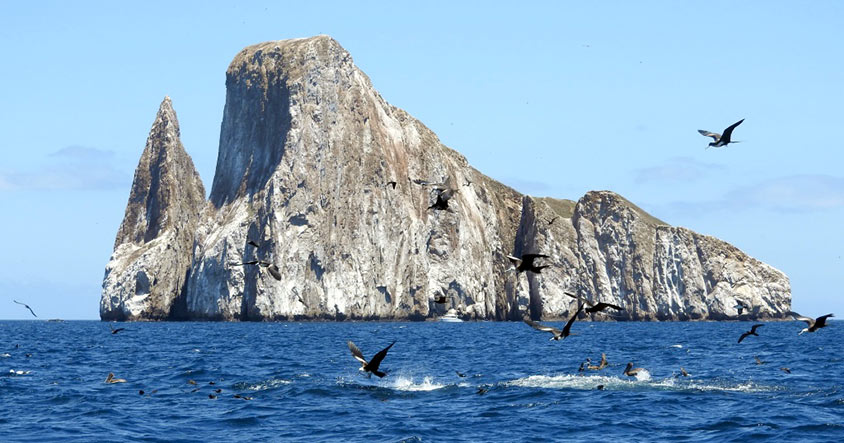 Floreana Island was formed by a volcanic eruption, making it one of the sixth largest islands in the Galapagos, and our fourth ‘Wonder’. This practically uninhabited island, glosses the land with its emerald coloured waters. Its landscape is rich in nutrients, with an on-shore saturation of a mossy misty terrain, a history of pirates, infamous settlers, and a wooden barrel at Post Office Bay, makes it one of the most colourful and talked about islands in the history of the Galapagos. The attraction of its simplicity takes you back in time; like you’re one of the first pioneers on the island. Your heavenly abode at Hotel Wittmer will complete your Floreana Island experience. 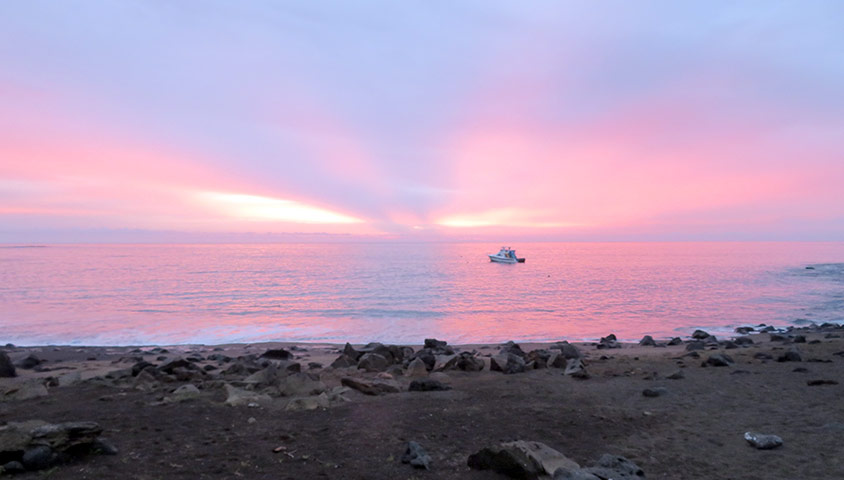 At Isabela Island you’ll witness the Tintoreras rock outcrop and the clarity of its crystal clear transparent waters. A natural channel showered with Rays, Marine Iguanas, Reef Sharks, Herons, and the Galapagos Island Penguins, Isabela Island will keep you spell bound for hours. The Galapagos Island Penguins are the only Penguins found this close to the equator. The Penguins’ unique features make for great viewing; its underparts bordered by a black line that extends down to their jet black legs, the upper bill and tip of the lower bill also embody this inky colour, their surrounding skin tone around the eyes a pinkish yellow colour. This tropical - “Noah’s Ark” symbolises tranquility. There is no doubt, this is the fifth ‘Wonder’ of the Galapagos Islands. 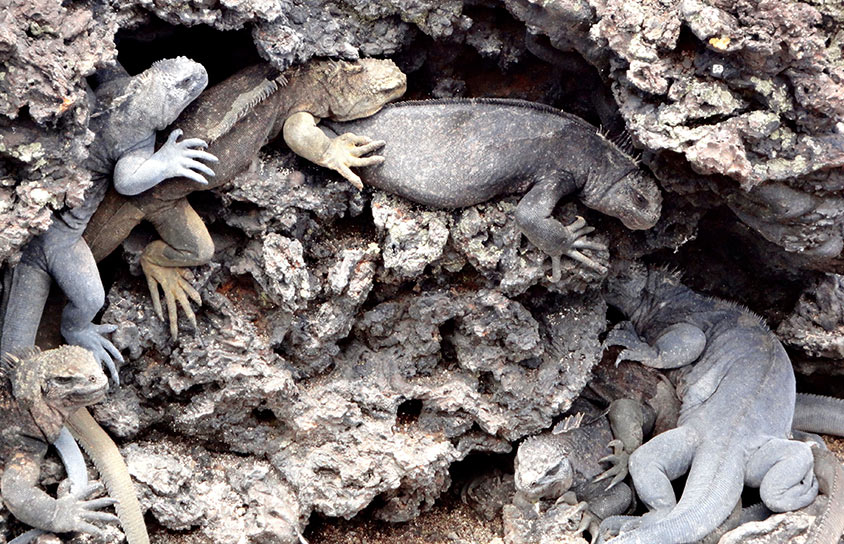 To reach the sixth ‘Wonder’ of the Galapagos, you must hike to the summit of Sierra Negra; once there, it is like being transported to another world. The swelling lava fields, echoed by the faint Galapagos Hawks’ call, is like walking from one planet to another. This is not for the faint-hearted however but absolutely worth its weight in gold to reach the top. The Sierra Negra is one of the largest volcanic calderas in the world, and one of the most active. 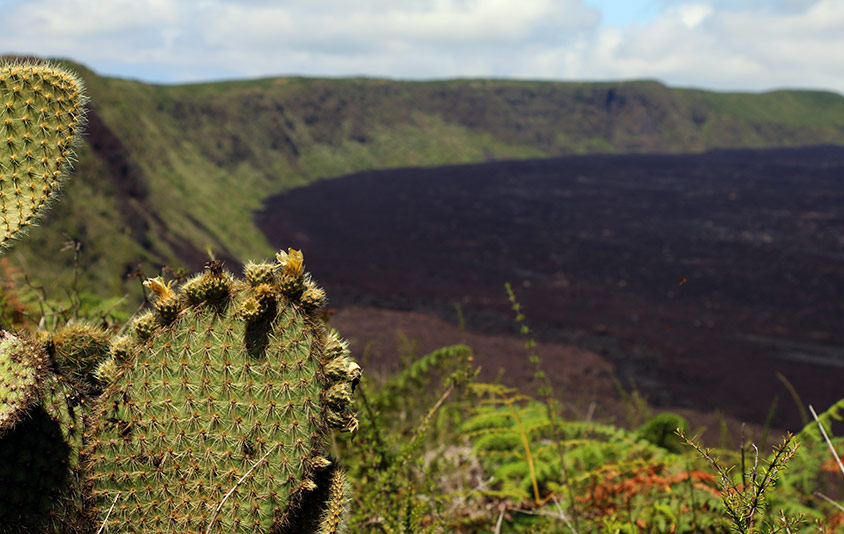 Imagine miles of long white sandy beaches, with crisp waves rolling against the shore, falling over themselves in a playful manner; Sea Lions, Penguins and hundreds of Marine Iguanas carefully patrolling the area. A slice of heaven, unspoiled, and untouched by mankind. A beautiful ample beach enriched with pristine wildlife and eco-system. That is Tortuga Bay, our seventh ‘Wonder’ of the Galapagos.

The people, the boutique habitats, the volcanoes, the smell, the ambiance; the Galapagos Islands has an unstoppable energy bursting with unique wildlife and landscape, you’ll experience the raw beauty of this land like no other. Now can you see why we have a soft spot for this place?

Looking to explore some of these incredible "Wonders" up close and personal? Check out our trips in Ecuador & the Galapagos here if you're looking to tick this incredible area off your bucket-list!

The Galapagos Islands and wildlife are synonymous – you can't really mention...

The Galapagos Islands is an internationally renowned diving destination home to...

5 Best Islands to Visit in Galapagos

The Galapagos Islands are an adventures dream with plenty of hiking,...

The Best Way to Explore the Galapagos Islands

There are dozens of tour companies out there offering Galapagos Islands tours -...