Top 10 Things to Do in Peru During Your Trip

There is so much to see when visiting Peru, it would be hard to squeeze it all into a single Peru trip. Here's a rundown of the most popular Peru attractions, from lively cities to ancient sites that still have the archaeologists scratching their heads.

There is so much to see when visiting Peru, it would be hard to squeeze it all into a single Peru trip. Here's a rundown of the most popular Peru attractions, from lively cities to ancient sites that still have the archaeologists scratching their heads.

Have a look at our Peru itineraries for ideas on planning your Peru holiday. Our 10 or 7 day Ultimate Peru Adventure 'Jaguar' includes hiking the Inca Trail to Machu Picchu and is an adventurous itinerary packed with hiking, biking, backpacking, and jungle exploration.

Machu Picchu is both the most well known and least known of the Inca sites. Since its discovery in 1911, Machu Picchu has been considered one of the world's greatest architectural and archaeological monuments, but to this day, experts cannot agree on why or exactly how this city of stone was built. 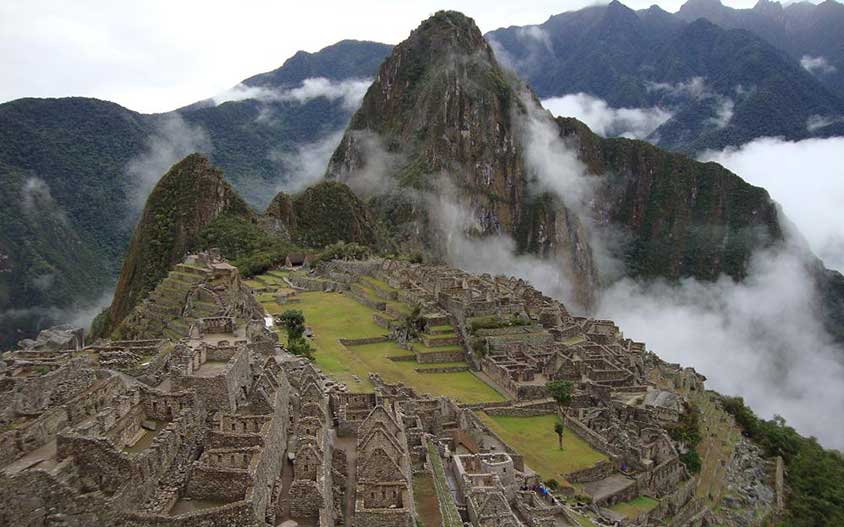 Founded in 1540, Arequipa is Peru's second largest city after Lima. Arequipa gets its moniker "La Ciudad Blanca" (The White City) from its gleaming white buildings made of sillar, which is a light volcanic rock. The city is surrounded by three volcanoes, including El Misti, which is still active. Some of the world's deepest and most spectacular canyons can also be found nearby.

Once the capital of the Inca empire in the 14th century, Cuzco is a fascinating town in Southern Peru full of ancient treasures and modern gems.

With about half a million residents, Iquitos is the largest city in the world that cannot be reached by road. Located on the banks of the Amazon river in the Northern Amazon basin, it's the perfect base for exploring the unique wildlife and largely untouched jungle in the national parks.

Lake Titicaca was the most sacred body of water to the ancient Incas. It is believed the Sun God ordered the first Inca to rise from its waters to form the Inca Empire, and according to mythology the place where the world was created from.

Today, at 12,530 feet (over 3800 metres above sea level), it is the world's highest navigable lake. Separating Peru and Bolivia, Lake Titicaca is the centre of a region where thousands of subsistence farmers make a living fishing its icy waters, growing potatoes in the rocky land at its edge and herding llama and alpaca at altitudes that leave travelers gasping for air. There are still traces of the Spanish conquistadors' aggressive campaign to erase Inca and Pre-Inca cultures and, in recent times, the lure of modernization beginning to touch its shores.

Lake Titicaca has a surface area exceeding 3,100 square miles, not counting its more than 30 islands, and is so large that it has waves. It is easily accessible from the quaint town of Puno, Peru or Challapampa from the Bolivian side. Top attractions on Lake Titicaca include Uros Islands or "Floating Islands" built of reeds, Taquile Island, the biggest island Isla Sol, Puno, and Amantani Island.

Lima is the capital as well as the industrial and financial centre of Peru, so you'll likely start or finish your Peru trip here. It's the most populous city of Peru, and its cultural richness can be witnessed in the multiple museums, galleries and religious sites. And let's not even start with the culinary scene!

Miraflores is the side of Lima the government wants tourists to see and it's not a bad place to spend the afternoon while you're waiting for your flight or have just arrived. This tidy neighbourhood in the capital city of Lima features urban beaches, flower-filled parks as well as upscale shopping and dining. There you can visit

The Nazca Lines are one of the great mysteries that keeps scientists around the world buzzing. No one is quite sure how the Nazca people etched about 300 enormous geoglyphs - line drawings of figures, animals, birds and geometric shapes - into the surface of the red desert rock sometime between 200 BC and 700 AD. Many of the lines are several kilometres long creating precise patterns that are clearly discernible from the air. Why and how continues to defy explanation, but theories have ranged from aliens to art since they were discovered in 1927. Located about six hours by road from Lima.

Puno is located on the shores of Lake Titicaca, the area surrounding the city of Puno was where the Aymara civilisation, descendents of the Inca, started in Peru. This is an important agricultural and livestock region of Peru where you'll find llamas and alpacas grazing on the immense plateaus and plains. It's also a cultural centre for artistic expression, especially for dance.

The beautiful coloured striations of Rainbow Mountain in Peru's Andes are a spectacular sight, and undoubtedly the highlight of the lodge to lodge trek in Peru. 62 miles from Cusco and standing at 16,000 feet above sea level, the mountain considered a holy site in Peru can be visited by foot, mountain bike or horseback.

The Best Places to Eat in Peru

There is no place quite like Peru. And no, we’re not just talking about the ...

6 Peruvian Words You Should Know Before Your Machu Picchu Adventure

Because of its role as an international tourism destination, it’s totally...

Are you about or thinking to head out to Peru? Here are 26 of the most...

Best Things to Do in Cuzco, Peru

The ancient Inca capital is said to have been founded around 1100 AD. It is...